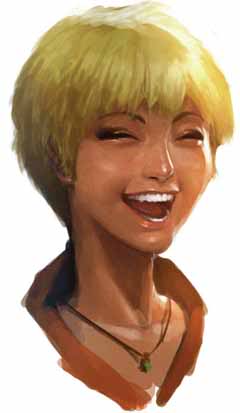 Trinia Sabor is a beautiful young painter who ekes out a living in the Midland district of Korvosa. She was hired to paint a portrait of King Eodred II and finished shortly before he came down with the mysterious disease that eventually killed him. Queen Ileosa Arabasti did not believe this was a mere coincidence and accused her of murdering her husband.

To the bewilderment of Field Marshall Cressida Kroft, the Queen, however, did not simply have her arrested right away but instead let rumors of her involvement in the regicide spread among the city’s populace for a few days until finally Field Marshall Kroft took matters in her own hand and asked Twitch, Sav, and Shakro to go to her home and take her into custody to both interrogate her and protect her from the mob who was becoming increasingly agitated.

After a short chase over the rooftops of the Shingles, the group successfully apprehended her and convinced her to give herself up to the Korvosan Guard.

After an outrageously short trial behind closed doors, Trinia had been found guilty of regicide and sentenced to death.

During her planned public execution, Korvosa‘s folk hero Blackjack made a suprise appearance and snatched Trinia away from right under the axeman’s blade.

Her whereabouts are currently unknown.