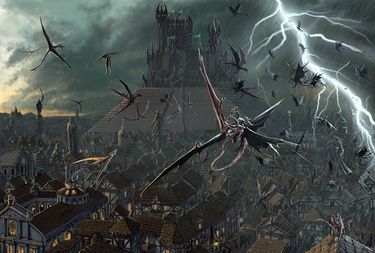 Easily the most imposing structure in a city of monumental architecture, Castle Korvosa is the fortress-citadel home of the monarchs Korvosa. The castle itself is built on an ancient four-sided, flat-topped pyramid known as the Grand Mastaba, built millennia ago by the Shoanti people. Built on the mainland’s Citadel Hill, it can be seen from anywhere in the city.

Since the completion of the main walls in 4464 AR, multiple lord magistrates, seneschals, and monarchs have added to the section of the castle within the high stone walls. As such, despite a relatively consistent neo-Chelaxian styling, the castle’s main keep contains many mismatched and randomly placed towers, walls, and stairs.

The castle can be approached from all four cardinal directions via massive ramps and stairs built into the side of the Grand Mastaba. The largest of these is the Great Ramp.